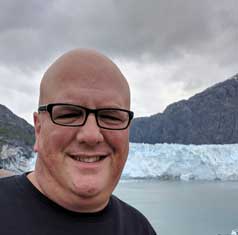 As a certified Google Product Expert since 2015 Michael has helped thousands of individuals, educators, and business owners use and understand the growing Google product field, Michael uses production streaming software such as, but not limited to, OBS, VoiceMeter, Zoom, Streamyard, YouTube, Twitch, Facebook, Twitter, Restream, Elgato. All of this is done live while hosting the full panel of contestants and an online audience.  As an early adopter of live streaming since 2012, Michael has grown a following for his help videos on YouTube and uses a suite of hardware and software products to produce an online game show seen by viewers worldwide all from his home studio. His ability to manage an hour-long, live production by himself, rivals that of high-end productions seen on television. Each week to create what many would call a first-class show.

When Michael is not managing the family business finances and personnel, he spends much of his time sharing his love of technology with his online communities. Michael has a passion for technology and helping others grasp the often difficult concepts of the tech world including software and hardware.